Fish, Fowl, or On the Hoof

Warning, This Post May Be Hazardous to your Pocketbook!

OK, ok, all you vegans can skip this post! But for the rest of you, here are some things to consider.

A Pescatarian diet is close to my personal preference although my husband has very different ideas and refuses to recognize my superior intellect and authority on these matters. Humph!

At any rate, this post is NOT about whether you should eat red meat, white meat, or fish. That's up to you. It's NOT about humane or inhumane treatment. Humane goes without saying. Overall, I will argue that it is the QUALITY of the animal protein you choose to eat not so much the type and amount you include. And quality treatment certainly enhances animal and ultimately human health. But since I (not my husband) am writing this post, we will do fish and shellfish first.

"Tile Fish" have the highest level of mercury so don't eat them. What's a tile fish? It's a grouper, bass or a snapper. So don't buy Chilean Sea Bass! Sure it tastes good but $34.50 a pound? You could have 145 servings of salmon to get the same mercury as one serving of Chilean Sea Bass.

If you don't know your blood mercury level or you don't know how important it is to your individual genetic health profile, please come on in! Some of us can eat tuna and some really shouldn't.

One thing I've noticed, if a fish comes from a relatively enclosed body of ocean water, especially if this "bay" is next to a large industrialized city, the fish are more contaminated. Make sense? So the Gulf of Mexico has very polluted fish, (not just from mercury), as the Mississippi River has been dumping contaminants into it for centuries. "Local" Los Angeles fish seem to have the same problem. I always check mercury levels on our local "weekend" fishermen, women, or their friends.

One excellent source of sea food is Dry Dock Fish. (drydockfish.com) They sell fresh fish from around the world at Wilson Park, Manhattan Beach, and Palos Verdes Farmers Markets. More expensive, yes. But they have a large number of very very satisfied customers who would eat no other fish. And yes, they have a lot of high mercury exotic fish so pay attention to what you buy. Their website tells you what is fresh each week in fish, shellfish and more. 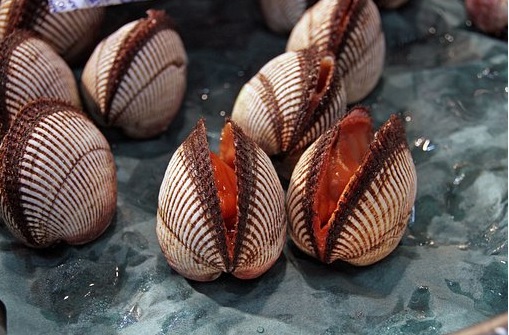 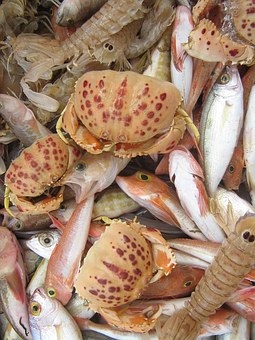 Clams, muscles, oysters, abalone (the mollusks) certainly are very good for you. Shrimp, crab, and lobsters (the crustaceans) are less so. Lets talk about the mollusks first. They are an ancient and huge phyla originating some 500 million years ago and compromising 23% of all marine species. Mankind has always eaten them and thrived. It was the mollusks that got us through the last ice age without starving. At that time, our ancestors were living in just a few caves off of South Africa, most of the rest of the world was covered in ice.

The mollusks, even though they are bottom dwellers are not bottom feeders. They are surprisingly nutrient dense, omega 3 rich and toxin free. Bivalves filter the water and mainly consume algae and discard the rest, including most toxins. They are low in calories, extremely high in essential minerals, contain B12 as well as omega 3's! Just make sure you don't consume bivalves harvested during a red tide (toxic algae bloom). A clam or oyster just can't run away from a red tide. Bivalves from off of New Zealand are my favorites. So, in general, try eating your scallops instead of your Ahi.

Squid and octopus are also mollusks, "cephalopods", or mollusks with a brain in their head. Octopus are very smart, can switch observation tanks by opening latches, grab a lobster for dinner, then pop back into their own tank while the marine biologist isn't looking. Their intelligence is that of a puppy. These invertebrate creatures of ancient wisdom I leave alone out of respect and awe. Not so with their other relatives. For instance, the gastropods only have a primitive neural net surrounding their mouths, stomach and digestive tract. Come to think of it, I know a lot of people like that, but that is a different story.

Shrimp, crab, and lobsters, in general get a thumbs down for many reasons. Yes, they are low in calories, and no their cholesterol content doesn't matter. Their shells are wonderful stuff, containing minerals, glucosamine and astazanthin. But their flesh.....well, here's some facts. 97% of shrimp is farmed, mostly off the China coast, and are just packed with toxins of all sorts. Crustaceans ARE bottom feeders and pass along ingested sea bottom debris to you. In addition their nutrient density just isn't rich enough to compensate for their toxic load. Keep your money. Eat something else with butter and garlic.

Again, quality of care leads to quality of food. So I am not going to even discuss fast food or supermarket precooked chicken. You know better and don't really want to support that industry. But all of you dieters eating your Foster Farms "All Natural" Chicken Breasts are now in for a nasty surprise. Yes, the claim on the package of "no growth hormones, no steroids, all natural" is true but....ALL chickens are natural creatures. And it is illegal to use steroids or hormones in poultry, at least in the State of California.

Chickens are sold by weight, so of course bigger chickens are more profitable. The poultry industry goes much further than "diet and exercise" manipulation on these poor birds. They feed the chickens antibiotics and arsenic. Antibiotics aren't given to prevent infection, they are given to promote obesity by chronic gut dysbiosis. And it works. Arsenic makes the chicken eat more and makes the meat whiter. And the arsenic is passed on to us.

So then you eat an animal programmed to be fat since infancy, with gut problems and laced with arsenic and you expect to get skinny and healthy in the process? Let's not talk about your IBS, your bloat, your waistline. Lets not talk about the fact that arsenic is the #1 toxin most likely to harm Americans listed in the ATSDR database.

Buy organic chicken from "Rosie" or "Betty" or Costco or even "Fred". As long as it is certified organic. It's worth it, you're worth it. Or buy chicken at the farmers market.

Angus beef worth more? Probably not. Most beef is Angus anyway, labelled as such or not. Organic beef better? Yes, but there are some caveats. Organic beef have to be fed organic feed, can't be given antibiotics or arsenic, and can't be given recombinant bovine growth hormone. (R-bgh is legal in California to be given to cattle.) So far so good. But organic beef does NOT necessarily have to be grass fed, a term which, unfortunately, has vanishing significance as a label. And the last 20% of a grass fed cow's life is often "grain finished". It can still retain it's organic and grass fed label.

Another thing, look at the ORIGIN of local supermarket "grass fed beef". Here we are living 300 miles from California Cattle Country and the grass fed beef comes from Uruguay? What? And just because it is grass fed doesn't mean it's grass finished or certified organic. No thank you. Once again, try the farmer's market, their beef is grass fed, grass finished, certified organic and from Santa Barbara county.

Ok, believe me, there is only ONE MORE in this series on food and Farmer's Markets. I've had fun. Thanks again.